Full STEAM Ahead: How the Arts Enhance STEM Learning

The resurgence of the sciences in curriculum, particularly at the elementary school level, has occurred under the banner of STEM – science, technology, engineering and math. Like nearly every other aspect of education, this is ever-evolving and, in recent years, has grown into STEAM by incorporating the arts.

At first glance, the change may seem counter-intuitive. Indeed, some educators and researchers philosophically disagree with the inclusion of the arts, believing said inclusion muddles subjects that already can encounter issues engaging students. Others even go as far as to emphatically state that the arts take focus away from the other four core subjects. How does one then justify inclusion of the arts even as, according to some metrics, U.S. students continue to lag their peers from around the globe? 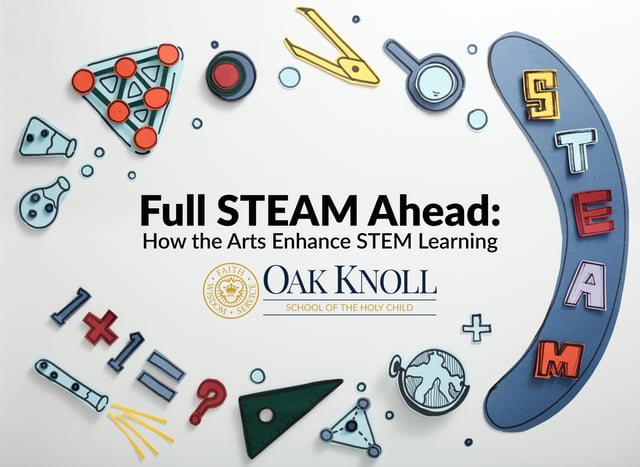 Contrary to those skeptical of the arts in education, more and more educators have come to believe STEAM can better engage students, especially those not innately gifted in the more technical aspects of the sciences, and can serve as a catalyst or entryway for students by allowing them to tackle STEM projects creatively.

This is the position taken by Anne Jolly, a former middle school teacher who currently specializes in writing STEM curriculum, who wrote, “The purpose of STEAM should not be so much to teach art but to apply art in real situations.” Jolly, writing in Education Week, emphasized how applied knowledge inevitably leads to deeper learning on the part of the student.

The Art of Science

In some respects, the arts are actually the next logical progression as some STEM activities – particularly those involving engineering – easily incorporate art. Certain projects may have better prospects for success should students use artistic skills to design and plot their plans before proceeding. Many educators also emphasize the context of art in STEAM representing the broad spectrum of arts, including but not limited to, language, fine art music and the aforementioned design.

Embracing arts can also lead to more out-of-the-box thinking. Andy the Science Wiz, a STEM specialist writing for the National AfterSchool Association, states that the inclusion of art “inspires creativity and imagination” and also drives innovation. He paints a picture where science and the arts go hand-in-hand, as opposed to the more archaic concept of the two being direct opposites.

The debate is hardly the end of an evolving conversation. In fact, some educators are already promoting the inclusion of reading into the mix, creating "STREAM" education. Could this next step further open doors to students to the world of the sciences? The evolution is inevitable, as anything that can remove obstacles between students to scientific creativity and broaden their educational horizons is certainly worth pursuing and a definitive reason why this movement is doubtlessly picking up steam.

Did you know Oak Knoll has its own innovation makerspace dubbed the I.D.E.A.S. Lab? Join us for a special Lower School open house on Wednesday, February 28, 2018, which will feature a special spotlight on engineering for students in kindergarten through grade 6. Register here.