Starting at a new school can be tough, especially when you don’t know anyone. I joined my school in seventh grade, which meant many of the girls already knew each other from younger grades, and I figured I would be like an outsider looking in. It’s really hard to get excited about school when you’re worried about being “the new kid.” 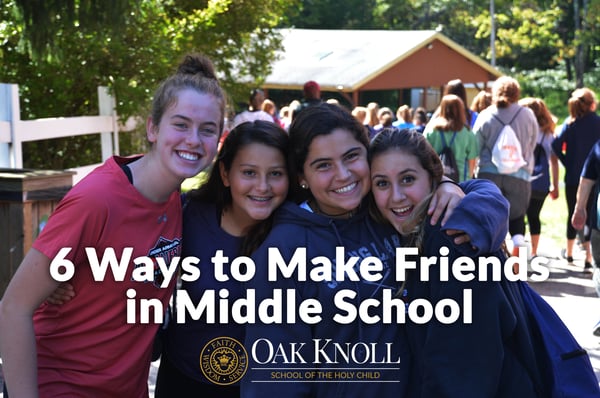 Luckily for me, there were plenty of new student events in the spring before I started, which allowed me to meet other students who were in the same situation. That made things a lot easier. It was relieving to know that I wouldn’t be the only new student starting the next year, and it allowed me to spend the summer getting to know some of the other new students before we saw each other again in the fall.

Because it’s hard starting a new school, I thought it would be helpful to put together a list of six ways I used to to make friends in middle school. I hope you find them helpful!

1. Involve yourself in a sport.

I joined soccer in seventh grade and formed great relationships.

2. Lunch is a great time to start conversation and meet new people.

I always made conversation during lunch time and tried to get to know people better.

3. Ask someone to study together.

4. Partner up with a new person you don’t know in gym class.

During gym I met some great friends by asking them to be my partner. Don’t be scared to ask!

I joined a knitting club in seventh grade and learned how to knit while making new friends with girls who also had joined!

6. Go to the school dances.

Dances might seem awkward but you can make great friends and have fun! I had a great time at the seventh grade dance!